My son is now 15 and how time flies, it doesn't seem 2 minutes since he was starting school and yet he is now in possibly his last unless he goes into higher education. When he was born, well from before he was born we didn't know how long he would be with us or even if he would be with us at all, as during pregnancy I discovered I had a fibroid which grew to rather a large size during pregnancy. If I tell you that at 12 weeks pregnant I looked like I was about to go into labour you get the idea. Anyway needless to say after quite a few painful problems I went into spontaneous labour at 26 weeks and 3 days and my precious little boy was born by emergency section.
You may by now be thinking what has this got to do with craft well, as Andrew was so prem he was given a 2% chance of survival, (that was increased from 1% as he weighed a massive 2lb 12oz and I was told 2lb would be a really good size and bigger could increase his odds of survival.)
We decided like most new parents to go snap happy with the camera and take pictures daily, this did reduce once we got him home but not by much and I would take one on the first of every month too. 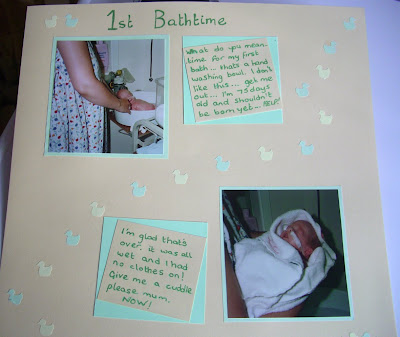 Andrew not long ago found some old photos of a holiday that he could only vaguely remember and asked if I could tell him about the holiday. I decided to make some scrap books for each year of his life though I've not completed many yet he already treasures them and calls them his legacy. In the first one I explained all about his prematurity and it went a little way to helping him understand why he has cerebral palsy that inhibits his mobility and he says it will help him explain to others in the future.

This page is when Andrew had his first bath in a handwashing bowl age 75 days and he was far from impressed.

Over at Creative craft challenge they have their first challenge with a theme 'The first one' and I thought this page was just so appropriate, I especially like my little punched ducks. I like to keep these pages of Andrew as a baby simple as I feel it reflects the innocence of a baby see what you think.
Posted by Julye at 3:12 pm

Aw he was sooo tiny!!!I would have been terrified to pick him up...my two were big 9lb ers!!

Sounds like you had a lovely time.....it is the Crannog and it is a lovely place to eat and I live just along the road from Morrisons!
Hugs
Jane
x

Fabulous blog, love the photos and thank you for becoming one of my followers, I do so want to wish you good luck in my draw. With love and hugs Shirleyxxxxxxxxxxx I also want to thank you for posting my blogcandy on your blog.