Thank you costs nothing means such a lot

In case you don't know my son has over his school years had the misfortune of meeting some not very nice and ignorant children who thought he made a prime target as he uses a wheelchair for being bullied. Last september he started a HND course at college and found a little of his self confidence return, though he still had very low self esteem.
His ultimate goal was to get enough qualifiacations in IT (all geek to me) to work at HSBC head office in Sheffield where 5 years ago he did 3 weeks work experience and loved it.

Over the summer HSBC advertised some apprenticeships and although he never thought he stood a chance thought it would be good experience to go through the interview process for future reference, a holiday project so to speak and a distraction from the performance we were having with the college and student finance due to bad communication and data input on one or both of their parts.

Anyway boy I am so glad I am his carer at home and dread the day I have to go through an interview once again if I ever seek employment again. The job was for 18 to 25 year olds so the majority would be school leavers and although my son had done business A levels as well as IT and on his HND had done a units work on employability also all of which was suppose to reflect  the interview process boy they were both greatly lacking in knowledge.

My son had also decided that he would like to see a life coach to help him boost his self esteem and confidence, we knew one as we had actually helped him when he was preparing for a seminar on how different life is for those with disabilities(my son having cerebral palsy) so we booked an initial session with him.

The interview process was a real rollercoaster and first it was submission of CV and complete an online application form. My son got through this bit then it was two rounds of online assessments, the second was a nightmare and caused some stress as we sat there for moral support my hubby and I couldn't believe the test. It said it was everyday maths and there were a couple of examples to start with which were just look at the graph or table and read off a certain bit it asked for. My son thought easy no problem then the test began ... answer 18 questions in 17 minutes , that seemed fine if they were like the examples but no the questions were so much more complicated  with calculations of stuff and then comparisons. I thought I was good at ordinary maths but I was still trying to work out over my sons shoulder what the question was asking when he was moving on to the next question. He was so frustrated and deflated when he only managed 14 in the time and was convinced that was the end . Four days later he got a phone call asking him to book a telephone interview which would related to HSBC values. Emotional roller-coaster or what.

Thank heavens for Paul the life coach he was such a help he gave Andrew the confidence he needed to answer the questions and told him what format to use , but not the answers that was found using the internet and then some preparation work finding examples Andrew my son could use from his life experience.

Telephone interview over we waited again , don't know who was more nervous as by this stage it was no longer just an experience exercise , I was convincing myself that he might actually stand a small chance of getting to the final stage and find out what a real interview was like, but as it would be his first ever interview I didn't expect more than that and meanwhile I was phoning student finance and college to see where the finance was at.

Andrew had another couple of sessions with Paul the coach and though I know some of what they chatted about related to this interview process I do know that Andrew did seem more confident in himself some of the time.

Andrew was sucessful and was offered a face to face interview so more preparation and cue cards were written and his 9am interview arrived, when we met him after I thought he must have eaten a bag of sugar instaed of having an interview , he was absolutely buzzing and was as high as a kite. Then it was just a waiting game. We later learnt that there were 120 interviewed over 4 days for 45 positions and had to wait until the end of August to find out the results which would be in time for the return to college at the beginning of september. How elated was Andrew when he got a phone call to say that they would like to offer him one of the jobs, and even more so when they actually only offered positions to 30 of those they had interviewed. It was a happy day for me when I could say to both college and student finance that we no longer wanted the grant and that Andrew handed in his notice to college as he had his dream job with the prospect in a couple of years of revisiting his HND and degree if he wants to, but will be a working man from October 1st.

He has now reached the stage of ...have I done the right thing....whats it going to be like  and all that goes with your first job and any change of job along with butterflies and excitment too. He has seen Paul the coach again and enjoys the progress they have made  and I'm sure as he asked me to make him a thank you card that he believes the coaching helped him reach this amazing goal he had set as something more long term and I am thankful too.

The card Andrew asked me to make he wanted to use the coaching company logo on but to keep it suitable for a man also, not too tall an order then. The logo is circles as you can see on the business card, not promotion or selling just to illustrate the logo.
The card is quite clean and simple but I think the dry embossing balances the circles and Andrew decided on a silver peel off thank you as opposed to a black text.
Hope he likes it, and I'm sure Andrew will continue to grow in self esteem and confidence when he settles into his new environment and he knows that as well as us for support he can always ask for more coaching. 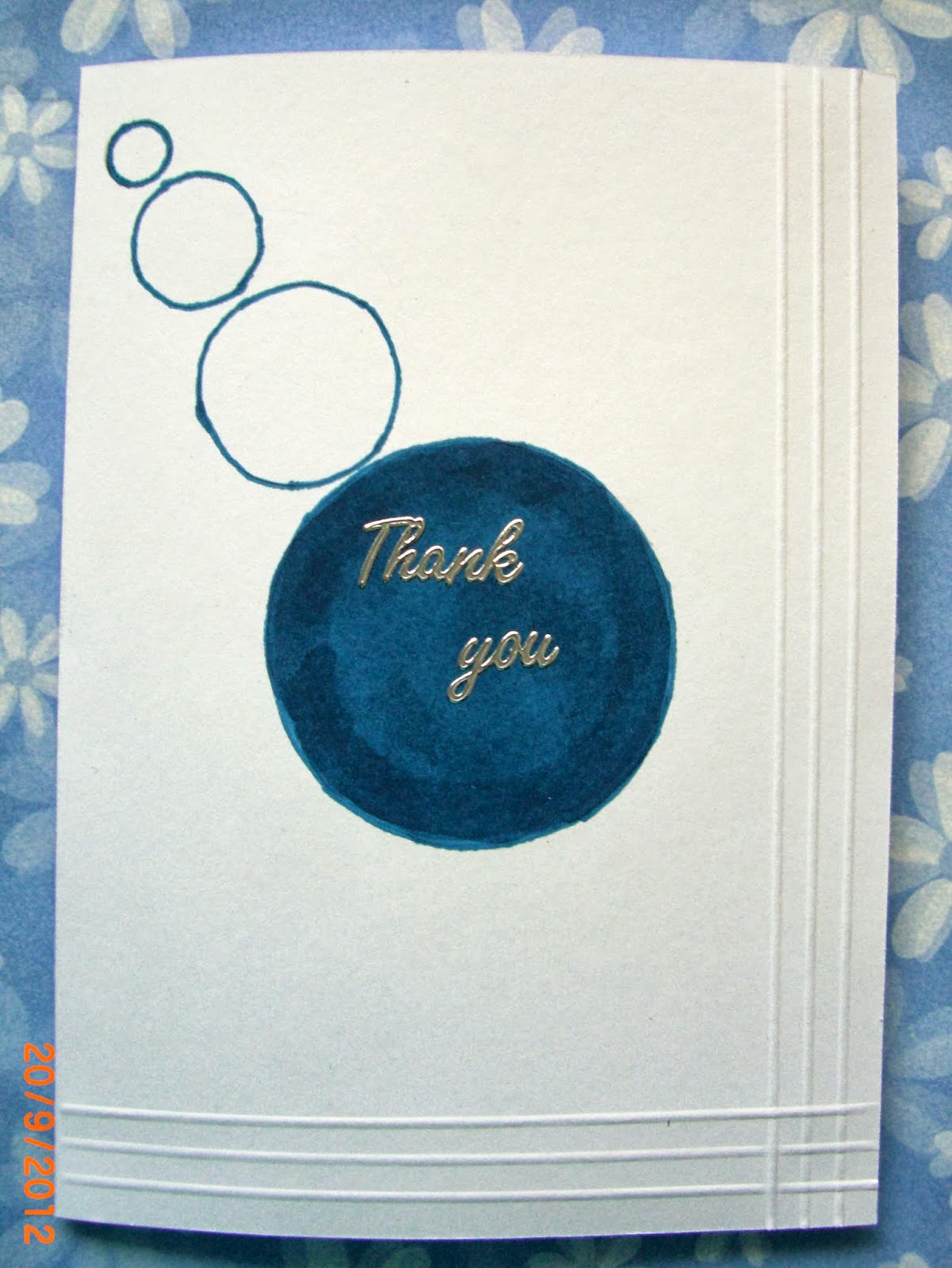 I think I got the blue a little dark though my colour swatches it did look a good match but never mind , it may lighten a little as it dries. The sentiment as I say is a peel off and I do think it is one of my favourites as its just two words that can mean so much and cost nothing to say but can convey such a lot. The embossed lines are just straight lines embossed using  my EAZI score board, simple really and a really quick make too.

I would like to enter this card into the following challenges;-
chocolate,coffee and cards-anything goes
oh lala-magnificent men well it is for a man
I love promarkers-anything goes
creative inspirations-clean and simple
passion for promarkers-embossing
southern girls-monochrome
as you like it -favourite sentiment
Sister act card challenge-anything goes
Polkadoodles-candy colours( the blue circle reminds me of the big blue gob stoppers we use to buy when I was a child- they are probably no longer sold due to health and safety now lol)
Jelly Park- sentiment is key

Congratulations and well done to Andrew -as the mother of a son with cerebral palsy I KNOW how hard things are and what this will mean to all of you - my son is very severely disabled but has just achieved a 2:1 pass on his BA degree at the age of 21 - we are so proud of his achievement - just as you will be. Your simple card says it all hugs Judith x

Congratulations to Andrew, great card for a male

Hunny, I was beginning to wonder how your post would end so I am so absolutely thrilled for Andrew that he got through that torture of the interview process and has got the job he wanted. That is fantastic news. Please pass on my congratulations to him! Hugs xx

I am so pleased for your son, you must feel so proud of him.
Your card is fabulous, I love the design
Thank you for taking part in the Passion for Promarkers Challenge this week
Sue xx

A lovely card and how wonderful to read the happy ending to your tale; I have two with Aspergers so education here has not been plain sailing and I can also empathise with student finance, may I wish Andrew all the best for the future and well done to you for being there for him and battling on his behalf so he can attain his dream. Oh and thank you for joining us at I♥ProMarkers this week
Ruth x

gorgeous card. Thank you for joining us at I♥Promarkers good luck Ginny x

Lovely card, thanks for joining us at Polka Doodles.

Lovely card, thanks for joining us at Polka Doodles.
Anjie

Great story Julye and with a lovely happy ending too. I am sure Andrew will love his new role. Great card using the Life Coach's logo - I am sure he was chuffed with it. Thanks for joining in with our Magnificent Men challenge at Ooh La La this time.
hugs
Dawn xx

Hi Julye,
Huge Congratulations to your son. I work in a job centre & I know just what a massive achievement this is. What a lovely card to say Thank You. It's always nice to feel appreciated. Thanks for joining us at Passion For Promarkers this week.
Hugs,
Andie xx

Beautiful card and gorgeous autumn colours. Thank you for joining in the Crafty Sentiments challenge this time.
Cathy xx

I am so pleased for your son, you must be very proud. I'm sure his coach was delighted with the card. Thank you for sharing it with us over at Jellypark Friends for our Sentiment is the key Challenge. Mel :o)

Thanks so much for taking part in our Southern Girls challenge. I love this CAS look.

Congrats to Andrew,,, sounds like he worked very hard and deserved the job as much s any other applicant!!! YOur card is fabulous!! Thanks for joining us at Polka Doodles!! HUgsxx

Huge congratulations to Andrew it's quite a journey he has been on and I have to say that I fully understand the road he has hiked! I am dyslexic and my son has Asperger's syndrome, Please tell you son from me he is a strong young man and the things he has been through are stepping stones to a bright and successful future.... the reason he questions has he done the right things is due to nerves and once he gets to the job he will feel much better after the first day nerves have gone!!! GOOD luck to him and well done to all of you it's a bumpy ride being a kid but even bumpier as a parent so sending you a hug too!

Fab card with a perfect sentiment, thanks for playing along at AYLI challenge this time,