What makes a colour a halloween colour ? I know what everyone thinks of as halloween colours but when you think of the vast array of costumes now worn for halloween nolonger just witches , ghosts, dracula and pumpkins but any costume you can think of are there any colours that don't belong to Halloween so to speak? 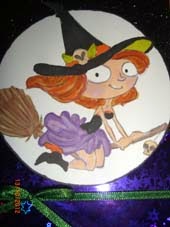 Anyway enough of my ponderings and onto my crafting. This card and envelope I have made with one of my neighbours daughters in mind as she is 5. I don't actually own many kraftin kimme stamps in fact I own only one that I won in a challenge a couple of years ago, but when looking through my box of images , some digi some stamped and any I've been sent in image swaps I found this one along with those I used on the envelope. The stamping wasn't perfect and there was nothing written on the back but after some investigation I think it is a kraftin kimme stamp which meant I could enter the challenge.

I decided to go with the 'traditional' colours of halloween and tried to make her bright and cheerful , well 5 year olds aren't going to want a dark and mysterious witch are they? 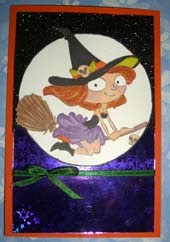 I know Grace likes girly thinks and definitely sparklies so glitter paper and mirri card had to be the backing topped off with a bit of green ribbon for good measure, nice and simple so the image is centre of focus.

Now kraftin kimme was having aWCMD celebration with 5 challenges which ends today hopefully I'm not too late to enter as one of the challenges is to decorate the inside of a card or an envelope so I made an envelope to match using the bat and cat that was on the image I had. Hope Grace likes it.

I would like to enter these challenges with my craft projects.

The card I will enter into the challenges at;-

kraftin kimme WCMD challenge#6-decorate the inside of a card or envelope
2 sisters -anything goes
LOC-loc or halloween
Posted by Julye at 1:36 pm

What a perfect nighttime card! Love that image! Thanks for sharing it with us at My Sheri Crafts! :)

Spooky cute! Thanks so much for playing along with The Pink Elephant!

Fab Halloween card ,cute and spooky and the colours are perfect
Thank you for joining us at Kraftyhands Halloween challenge and good luck
Susan xxxx

Thank you for joining us at Crafts 4 Eternity!

Fab Halloween card...Thanks for playing along with us at Di's Digi Designs Challenge this fortnight.
Wendy xx

She is so sweet! Thanks for joining us this fortnight at The Corrosive Challenge! Good luck!
DebbieM TCC DT

Super cute card! That's a sweet image! Thanks for joining us at My Sheri Crafts!

Cute card, love that you made a matching envelope! Thanks for joining us at Left of Center Challenges :)

spooktastic thanks for joining us at LOC
www.creativecardcraft.blogspot.com

Fab creation, scary and fun!
Thanks for joining us at Left of Center Challenges.
Hugs,
Julia