A work colleague and friend  and his wife are both celebrating their 60th birthdays this year and so are having a joint birthday party as I don't know either that well so am not sure of their tastes etc or anything specific to their lifestyles . I also figured that if they were sharing a party they are important to each other so this fun image from Jellypark would be perfect. 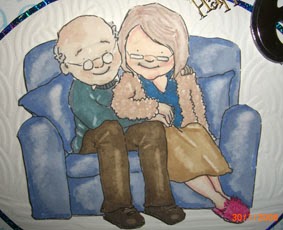 I coloured the image using promarkers and took the colours for clothing from the photo that was on their invitation apart from the pink slippers that was just for fun.

The inside of the card I decided to fill with all kinds of facts from 1953 the year they were born. I now know all kinds of useless information like 1953 was the first year the VW beetle was introduced to the UK though no one thought it would be popular or last, how wrong they were. Anotyher fact was that Frankie Lane dominated the pop charts with I believe although there were others that many will know like 'she wears red feathers' and how much is that doggie in the window?' My son was laughing when he read this and said I can't believe that songs like those were called pop, as he remembers singing the doggie song at primary school. 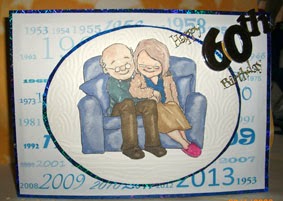 The background paper I created in word by typing in the years numbers and changing the font style and size for each. I did print one in grey shades too but decided to go with the blue. I mounted this on blue mirri card as well as mounting the image base to add sparkle, well it is a celebration. The base oval for the image I added embossing to a rainbow pattern to symbolize wallpaper and wood grain to represent flooring so the image appears grounded.

The sentiment is a peel off and the numbers are from my stash sorry not sure where from originally.

Hope they have a fun time celebrating and get a giggle from the card too.

crafting for all seasons-birthday
OLLCB-birthday
Ladybug craft challenge-blue and white
rogue redhead-birthday ( I know the rules state must include stamping but not sure if that includes digital stamping.I'm sure if it doesn't you will remove my entry so appologies if I misunderstood your rules)

It's a lovely card! Great design and cute image. Thanks for joining the lovely ladybugs this challenge!
Chris
x