Is this just fantasy? 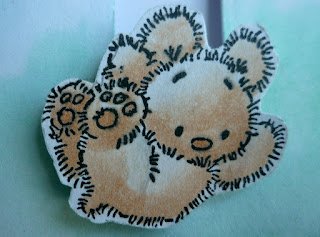 When I was a child I always thought I was quite lucky when my birthday came around in some respects as my birthday fell in the summer holiday, I didn't think it fair that my school friends who had birthdays in term time would get cards from everyone in class which as my school friends didn't live anywhere near us and I didn't associate with them out of school I didn't. I played with my neighbourhood friends who all went to different schools which was good and I was one of the oldest so one of the biggest too which meant unlike those school friends who got cards from the class and birthday bumps too, I happily missed out on that treat as my neighbourhood friends were in no position to give them to me. 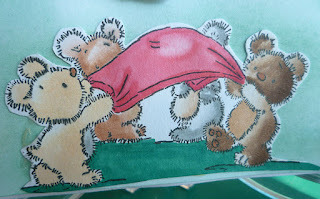 The little chap on my card seems to be having fun though and I think his birthday bumps must be more like playing on a trampoline than the bumps I remember.I like to think animals have fun and celebrate their birthdays though animals life years are often more numerous than one of our years so they must have more birthdays every year and yes I do often wonder if part of my brain is in a fantasy world or that of a never grown up child but I can live with that too. 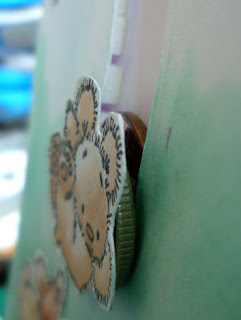 I coloured this fun lotv image with my new chameleon pens and my trusted promarkers (still learning to use the chameleons). I then fussy cut the image out. I wanted to add movement to the image  and finally decided I would have a go at making a slider card. I separated the bouncing bear from the image and stuck him onto a 5p piece. I created my base using a piece of white card a little smaller than my base card and I coloured with chalks using a poppystamps cloud die to create a tree line by rubbing chalks up to it. 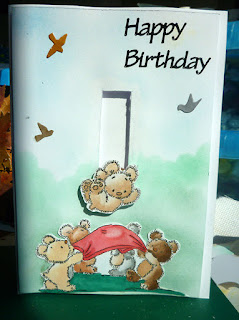 I then added a channel by cutting with a craft knife, about the width of the 5p piece and then stuck a penny to the back of the 5p with a foam pad sandwiching the background between them.. 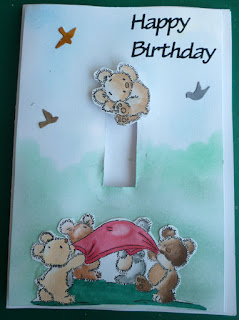 I added 3 fling birds die cuts from memory box , I love these and all the other little dies I have they are great for adding interest and details to cards , coloured with promarkers and a nice bold sentiment nothing fancy as I do intend the card being for a child. 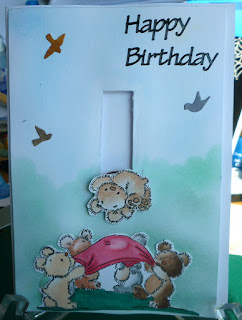 I got a bit carried away with the photos as I wanted to show how the baby bear tumbles as he's propelled into the air for his birthday bumps. 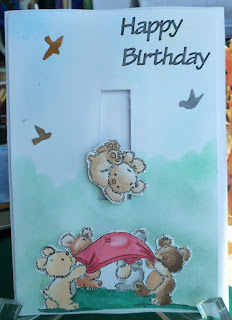 I would like to wish LOTV happy birthday as they celebrate their 13th birthday a bit old for bumps but I hope they still have fun celebrating.


I would like to enter this card into the following challenges:-

Creative craft cottage - 3 of a kind

OLLCB- something begining with B 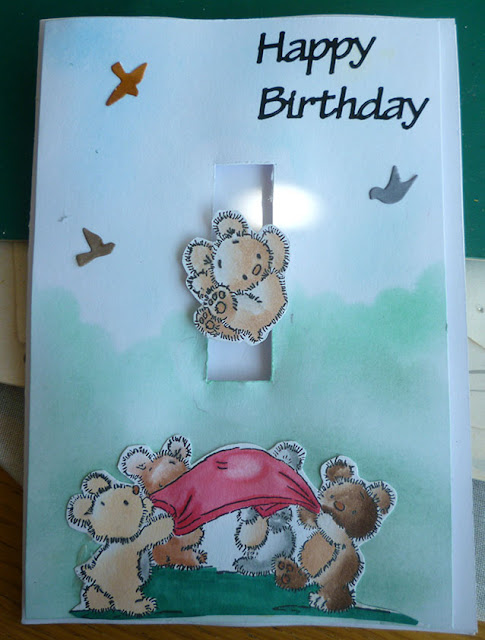 How inventive - so clever and the perfect image for your technique. (I think birthday bumps are banned these days LOL!)
Thanks so much for sharing with us at OLL.
Lynn x
DT

What an adorable slider, Julye! Well done. I’m so tickled that you are playing in our “Anything Goes” challenge at Crafts Galore Encore and I’m wishing you the best of luck in the draw. 😀
NanaConnie DT

What a fun card and a great memory jogger. The slider is a clever idea too. Thank you for sharing it with us at OLL challenges Wynn DT

Wow.. the image fits absolutely perfect with the card-style
Thanks for playing along with our present challenge at Craft Rocket and good luck! Hope you will join us next month again.

Wwwwoooowww :-))) I love this funny card!

Thank you so much for joining our challenge at Fab'n'Funky! Good luck :-)))
Troppo Stella DT

Absolutely fantastic! thank you for sharing at STB!

Great card! Thanks for joining us at Craft Rocket, Claire DT x

so cute..I love interactive cards Thank you for joining us at Creative Craft Cottage. Cindy (DT)

This is fabulous hun, such a fun and happy card. Love your interpretation of the Fantasy theme, thanks so much for playing along at SNSRC. Hugs xx