.. so again don't look Kathy.
My sister had a thing about yellow when she was little but could never say it and always called it lellow. Its her birthday in January and being not long after christmas I always like to make a special effort so she gets a special card from both myself and hubby and one from my son, despite him now getting to the age where its not cool and he usually says just put me on your card, and then asks for cards for his friends, but I suppose thats teenagers. Anyway he likes the idea of winding up his auntie , another teenage thing and in some ways he is more like his auntie than me. 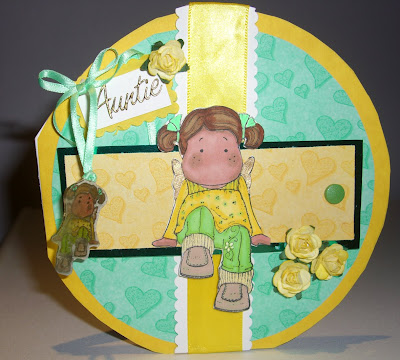 I decided to make this card in yellows and greens just for a change and yellow fit as it use to be Kaths favourite colour and now she tends to wear alot of green, intentional or not I don't know but she must think it's an ok colour. I love this heart paper and thought as it's a birthday card hearts are always appropriate as they send love without words, and no cool teenager is going to tell his auntie he loves her whthyer he does or not.

I mounted the yellow hearts on green mirri card just to add that bit of bling as my sis likes her bling, though on the picture it looks black, but it really is green, honest.

The layout is for just Magnolia challenge , cutting it close again as I think the deadline is tomorrow, well I hope it is, theirs is on a rectangle or square card, I can't remember which and my sketch isn't much help, but at magnolicious challenge they want any card shape except rectangle or square so I decided to cut my square card into a circle with a little bit of a flat bottom so it will stand up.

All the hearts I have on my card mean I can enter the challenge at Your Next Stamp, they have relaxed their rules so you can use any stamp at the moment.

Both Simon says and Quixotic challenges want charms on their cards, and I had the idea that I could make a matching magnolia charm that my sis could attatch to her mobile phone to remind her of her favourite tormenting nephew. I have tried to take a piccy of it but its not spectacular and it's the best of several, indoor lighting and avoiding shadows does make pictures difficult, but hope you get the idea. 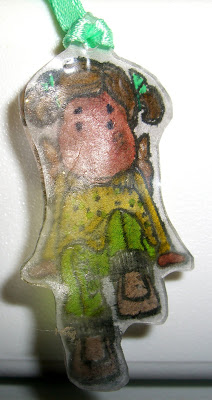 p.s. you have the wrong link in JM

Very sweet & cheery! Perfect for a birthday card--hope your sister still likes yellow, LOL! Love the roses & cute Tilda too!
Thanks for joining in w/ us on the Magnolia-licious challenge!

Great card and charm!
Thanks for joining us at YNS
Hugs
Lana x

beautiful card sweetie, wonderful papers and embellies, love your handmade charm too :), thanks so much for joining us over at Quixotic Challenges this week :)

Thank you for joining us this week at Quixotic Challenges!