A red card for a red letter day

I never really know what a red letter day is, I always presume its a happy day not one where you get lots of nasty bills etc.


My card is for a neighbours son who will be 14 I think,maybe 1 I'm never 100% sure of the neighbours kids ages I just know roughly so either way I hope it will be ok. He like my son is games mad and he and my son have spent hours in the summer on hand held games thingies sat in the garden playing against one another, very clever and as my son can't run around playing football I always think its very kind and considerate of him. 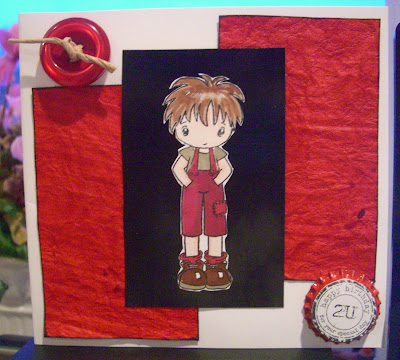 With this in mind I thought he might like this wee manga boy, which I coloured mostly red as per the theme over at the pixie cottage. I'm sure when they set the theme of pink or red they had more valentine type cards in mind but I thought it would be good for a boy birthday too. I  just thought I've seen him and his dad go to football matches and come to think of it his team colours are red ,white and black , even better. 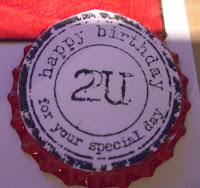 The layout was from the craftycatz challenge but I'm not sure when the deadline is , but I did have problems working out what to embellish with as per the layout but I think my button works quite well. Hope he likes it and you do too.
Posted by Julye at 5:10 pm

Good use of the color red and an adorable card, perfect for an older boy!

Hi Julye
A gorgeous card,thankyou for joining us at CraftyCatz for this week's challenge,
Hugs Dianne xx

You did just fine! Lovely card. Thank you for playing at The Pixie Cottage.

Very cute and I love the sentiment on the bottlecap!
Thanks for playing at The Pixie Cottage.

Wow, Julye! I see that I have missed SO MUCH on your blog. I just need to pop in more often!!! You've got some fabulous cards here :D Good luck on the DT calls also. You have such a sweet heart. Just thought I'd tell you :D
Love n hugs ~ Lori