Forever friends just seem to be timeless don't they?
Well I've not added text on this card yet as I've not decided if it will be anniversary  or birthday yet, but I think it might well be more anniversary don't you?

This card again only took me 20 minutes to do and that inculded climbing under my desk for one of the promarkers I dropped , having to move all my paper files at that.

The card actually qualifies for a few challenges and I like that although I do usually start with just one or 2 in mind, the layout and colours, everything else just seems to fall into place, well most of the time anyway.

The first challenge was for the colours of red white and black over at KL stampin n scrappin, which led me to the hearts theme as I love red black and white together they make such a statement and are good for mens cards too.

The hearts led to the forever friends challenge which is hearts suprisingly enough, and I used confetti hearts as I didn't have any heart paper but red and hearts just seemed to define each other.

The layout well thats from the challenge at just cute bears and as I'd used a bear it just seemed perfect. 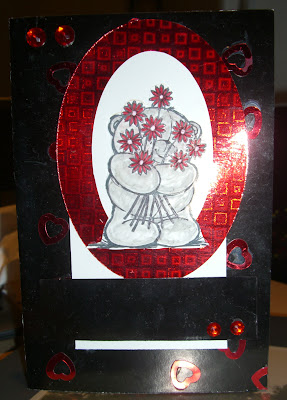 Finally Totally Gorjuss have a theme of  LOVE and I think my card says that, but it feels so wrong entering their challenge without using a gorjuss girl but when time constraints pinch beggars can't be choosers can they, so I hope they don't mind as much as I do.
Well here's my card, I hate having to take pictures in artifical light when its dark, but spring is coming thank goodness, it will be so much easier to get up in a morning.
Posted by Julye at 7:43 am

What a pretty card, love the deep colours you have used.
Hugs Sonia xx

Thank you for your lovely comment on my blog. The postcard on my card came from here http://tammytutterow.com/

Your card is lovely and I just love the image you have used and the papers.

Really pretty:-) Love the papers you used:-)
Thank you for joining us at TG this week
Michele

Gorgeous card and I love the shine on this and the hearts.
Thank you for joining in the Just Cute Bears challenge this time.
Cathy xx

bloomin eck, 20 Mins, wish i could make a card half as pretty in that time, thankyou for the sweet comment you left me darlin :)

Hi Julye, what a lovely card and I know what you mean about time constraints. Thanks for joining us at Just Cute Bears and TG this week and good luck. (with both)

WOW I love all the metalic and shine on this!!! You did a great job on the challenge and I love all that red, white, and black!!!

Thanks for playing along with us in this weeks challenge!!!

love the shine and shimmer on your card and the striking colour combo. thanks for joining in with us at Just Cute Bears this week.
hugs, annie x

Thanks for your lovely comment on my blog :-) I don't know whether the copics course I am doing would be good for promarkers too ,,, but you could email them to ask advice ,,, there is a link on my blog. I am sure they would answer any queries :-)

What a fab card, I love the red and black combo!!

Thanks for joining us at Just Cute Bears.

Such fun and oh so pretty!! TFS with DIE CUTS R US this week!!

Your card is very pretty and your detailing is fabulous! Thanks for joining us at KL Stampin N Scrappin!
hugs
Risa:)

Gorgeous card, love the striking colours x
Thanks for joining us at Just Cute Bears x

Wonderful card!! Love the colors!! Thank you so much for sharing this with us at DCRU this week!!
Sheri-DCRU DT

Lots of shine in this pretty eye-catcher. That shy little bear holding those flowers is a very sweet image. Great job creating a project for the NO DP Challenge.