A good luck card to spur my son on 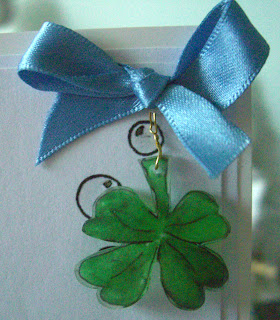 many of you know my son had surgery at the end of January to refuse his ankle, it seems like a lifetime since as he was non weight bearing for 7 weeks post op things have been moving quite slowly , not fast enough for my son by far but we keep being told he is making excellent progress and we are now at the stage where he literally has to build up his muscles in his legs to get him back to being independent enough to get himself from the floor should he fall. This has meant he has remained off school and had home education provided by hospital and home education services and myself, with a little bit of input from school when we have persuaded them to supply work. This has been hard particularly as Andrew starts sitting his Gcse's next week. He is as I'm sure many other teenagers are already starting to panic, particularly about his first exam which is oral spanish( maybe rightly as we have literally been working from a text book and dictionary and as I nor my hubby or his home tutor speak spanish he does feel very aprehensive about the spanish exams. 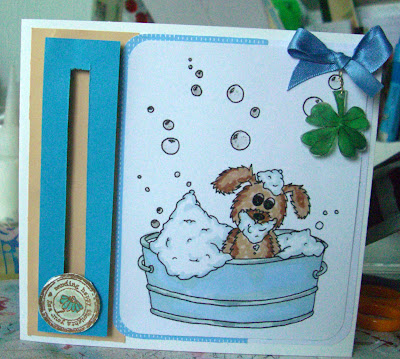 I thought I'd make him a card for next week to try and give him a boost and wish him luck, but if the amount of revision he is doing is worth anything he should be ok. I think it's important that he knows we are proud of how he has handled all the revision and the work he has put in and that he know that as long as he does his best we are very proud of him.

My card I hope will make him smile and give his serious worried attitude a break . The image is one I've had for ages from Lexi's doodles so thankyou as I think it was a freebie, it just makes me smile so hopefully it will Andrew too. I decided to make a slider card when I saw the sketch layout from sketch and stash, it just seemed to say that to me and I added a bubble sticker to the sending happy thought whimsy sentiment to keep in the bathtime theme. Instead of a flower which I didn't think he would appreciate I added a bow and made a 4 leaf clover charm for goodluck. I did wonder if it would look odd but I think it blends in quite well. Hope it all helps and does the trick and good luck to anyone elses offsprings or cared fors who will be undergoing the same torture over the coming weeks.

I will be entering my card for the following challenges;-

Wish him the best of luck hunni :D This is an image i love too...always makes me chuckle and i needed it this morning lol so thank you xx Thanks for playing at Lexi's Creations

Best wishes to your son.


Fabulous card such a cute image...x

What a pretty card! Love that cute dog!!
Thanks so much for joining us at Sketch and Stash!
Love Becky xx

Gorgeous card :-) the image is adorable and the shamrock is a perfect good luck charm :-)

thanks for joining the Sketch and Stash Challenge :-)
luv
Lols x x

What a great card,love it.
All the best for youre son.
Thanks for joining us at A Spoon Full of Sugar.

Great card, Scruffles looks so cute & I love that charm :)

Thanks for joining us at Lexi's Creations & Good Luck!

This is an adorable card. I'm sure it will help your son. Thanks for playing with us this at Incy Wincy. Hugs, Kim