Morning all, well hubby said it is suppose to be a mini heatwave today though don't think anyone has told mother nature in our bit of Blighty.

My first card today (another in the pipeline) is another card I made for Peter who I am having a card drive for. This one is for my son to send. He has started his chemo and radiotherapy and has a gruelling 6 months initial treatment to look forward to so I think I will be making cards every month to send to him to try and keep his spirits up, no get well as this isn't an option. If you want more info or to help click on the card drive link and it will take you to a post with more info. 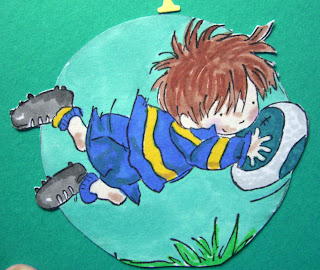 Peter is a Leeds Rhinos fan hence the colours which I had to look up on the Internet, sorry to any rugby fans if that's not the right spelling for try.

I coloured the fab LOTV image in the rhinos colours and cut a circle around the shape, I've done this a couple of times and am getting quite fond of how it looks.The image is coloured with promarkers and simply stuck to card base.(Not sure what happened to the card stick colour it looks green on this pic and as you can see from the others it really isn't)

The card is fab , I did a little improvisation as it is a fab card base from Whichcraft in Doncaster, they do loads of different ones which you can find on their website here and its really heavy card. They come all pre-scored and cut and as I didn't fancy sticking paper on it I cheated and used it as a template. Next time I'm in Doncaster which from me isn't far away think I'll pop in and buy more as Paula said a wee while ago she would be getting more styles in store and on line, hubby can't check what I'm spending his hard earned pennies on if I go pay cash and I don't have to wait for the postie either if I visit, though when I have ordered on line from Paula it's always arrived really quickly.


Anyway back to the card, I used the LOTV layout though at first it may not be obvious, my 3 strips that are on the layout are represented by the goal posts for want of a better description as I have no idea what they are called and the word 'try'. It did start out as a clean and simple card which to look at I suppose it might be classed as but for some strange reason I decided I would make a 'crowd' watching the game. I coloured strips of paper in various skin shades promarkers and hole punched so I had loads of wee circles which I then stuck randomly onto strips of double sided tape, I think its quite effective. Hope it cheers Peter up! 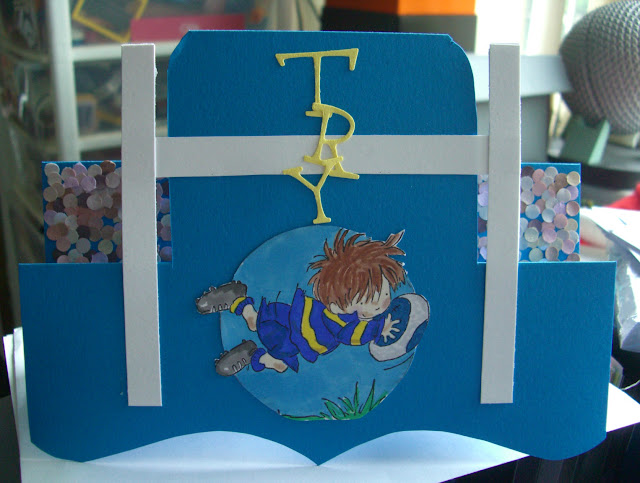 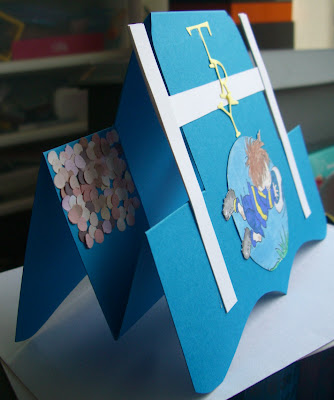 I would like to enter this card into the following challenges:-
LOTV-layout
crafts 4 eternity-sports theme
4 crafty chicks-C+S
MAWTT-C+S
Dutch Dare-C+S
Pixie cottage- outdoor fun+/sketch
crafty Emmas store challenge-anything but a square
one stop craft-get well card( I know it doesn't say get well but the guy it's to cheerup has a terminal condition but it has the sam purpose to cheer him up hope thats ok)
Phindy's place-circles
Posted by Julye at 2:02 pm

Super cute card - adorable LOTV image.
Thanks for playing along with our CAS theme at MAWTT this week.
Good luck.
Debs xx

i love this card...especially the people in the stands-- that is really cute! love the football theme!

What a brilliant card, love the shape, love how you captured the little scene perfectly. Thanks for joining us at C4E this week.
Pinky

Hi sweetie, this is gorgeous i love the colours here so soft, thanks for joining us at LOTV this week hugs pops x

Great step card! Love the goal and the peeps too! Perfect CAS card! Thank You so much for joining us this week at Dutch Dare!
If you get a chance to hop over to my blog, I am hosting a no strings attached blog candy. There are a few prizes to win.

I love this LOTV image and I love how you have made the rugby posts!
Congratulations on your Top 3 last week.
Thanks for sharing it with us this week at MAWTT and good luck with the challenge
Hugs Laurie x

Oh wow this is just fantastic hun, my hubby would love this (he used to play rugby for staffordshire along time ago lol) Just love it hun & I'm sure Pete will to!

Thank you for sharing with us at MAWTT & CES Challenge this week, good luck!
Hugs Shell xx

Keep It Sweet and Simple said...

Well, it's a scorcher up here in Yorkshire today, so I hope you're getting your share of the sunshine!

Wow, this is gorgeous! Thanks for sharing your fabulous card with us at The Pixie Cottage! Hugs, Karen

Lovely card, thanks for playing on MAWTT with our CAS Challenge this week Hazelxoxo

Thanks for playing at 4 Crafty Chicks, very nice card!

An imaginative card and a great take on the sketch. Thanks for playing along at LOTV this week, hope to see you next time. Good Luck! Hugs Christine x

Such a fun image and great cause, too. You are very kind to send this man cards to cheer him up. Love the fancy fold you used too. Thanks for joining us at Phindy's Place this week.

What a fabulous card!
Thanks for playing in The Pixie Cottage this week :)

What a lovely CAS card. Thanks for playing at Dutch Dare and I hope we see you again next week. Hugs, Sue (Dutch Dare DT member)

Fabulous card. Love the esign. Thanks for playing with us at Phindy`s Place. Hugs...mona

Fabulous! thanks for joining us at C4E this week hugs x

What a gorgeous card love the fold, thanks for joining in this weeks OSCC. Hugs Shelley xx

What a gorgeous card love the fold, thanks for joining in this weeks OSCC. Hugs Shelley xx

Great card, Julie - what a fab Shape!! Thanks for joining us at CES challenges this week, Juliexx