Now most of my commisioned cards are actually for my mum so as I know most of the people she sends card to I actually find it fairly easy to make them as I can relate to the person the card is for. I never realised how hard I would find it making for someone else. Hubby came home and said one of his coloeagues wanted a card for a 21st for a male friend of one of their daughters. I asked if there was anything in particular that had been asked for and was told well he's into rock. 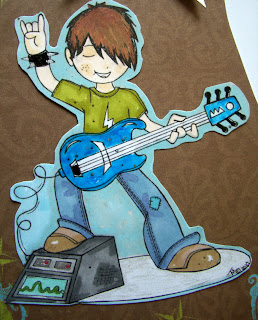 How hard did I find this. I started with an image I recently chose from a prize from the stamping boutique and as I had a DCWV rockstar paper pack figured that would be a good starting point. I chose which paper to use and took inspiration for the card shape from one of the other papers. I tried to keep to similar colours for my image which I coloured using Promarkers and sakura glaze pens , well a rock guitar has to be shiny. I also added dots of glitter glaze to the background and coloured the spotlight in glitter glaze too. 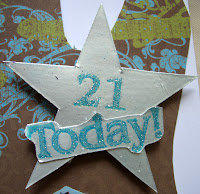 Now this is where I became unsure of myself the sentiment. I decided to keep with the star theme and cut one from silver card , mirri didn't look right it sort of stuck out like a sherriffs badge so went for matt. I stamped in blue ink and as I couldn't fit 'today' on cut that out separately. I embossed over the top of both with moonglow magic pearls powder and stuck onto the card with sticky pads. I think its ok and looks better from a distance. Just hope she likes it fingers crossed. Will let you know the verdict when hubby takes it in to work.

Edit;- hubby said the lady who ordered it thought it was great and said the boy on the card was just like the guy it was for, so I was really pleased, think hubby may have pocketed the pennies though, but never mind I'll just spend them on the internet. 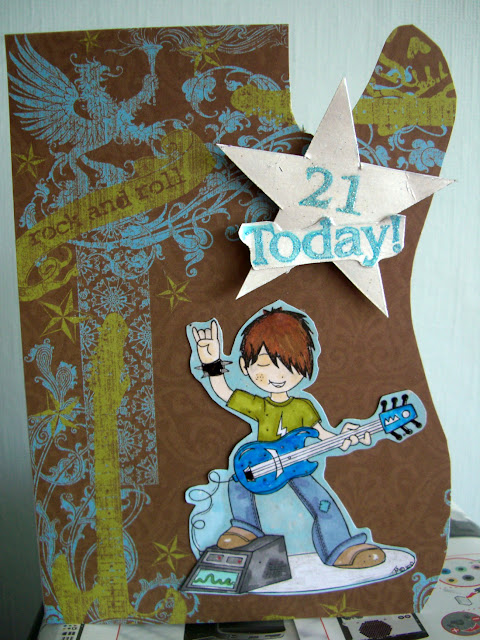 I would like to enter this card into the folloing challenges:-
cards for men-stars
Kreative stempel friends-birthday
Crafty creations-letit shine
Little darlings-fav colour combo (I love blue and brown together)
I love Promarkers-anything goes
scrapbook sisters-anything goes
sisterhood of crafters-male themed anniversary/birthday
Posted by Julye at 6:00 am

Hi. The image works really well with your paper. Thanks for joining us at I ♥ Promarkers.
Tine :)

Looks like the perfect card for someone into rock! Super job on it.
Thanks for joining us for the Little Darlings Challenge. Myrna

A great idea for a card, I'm sure it was well-received. Unfortunately our challenge this week is Something New as in New Baby, New Home, New Beginnings etc - I am really sorry! I do hope you will join us for our next challenge though.

Oh this is fabulous.
luv
Debby

Awesome card... love the rock-n-roll and the card shape. Wonderful! Sigh to be 21 again :-) Thanks so much for joining us at The Sisterhood of Crafters for our manly anniversary/birthday challenge.

Great card, and I am sure the recipient will love it
Thanks for playing along at Crafts Creations this week

My name is Wynneth said...

You did a brilliant job with this card - I'm not surprised they loved it ! Thanks for joining us on I ♥ Promarkers this week.
hugs
wynneth
x

Very nice card. Great image. Thanks for joining us at Cards for Men Challenge. I love seeing your creations. Good luck on the challenge.
Hugs, Pat