You will probably tell as you read this that I have sort of muddled up the order that I have put my posts in  but just adds to the fun of confusion.

This is the second of several I have been asked to make for a friend my hubby works with and whom my son spent alot of time with when on work experience a couple of years ago.He has been under the weather so to speak with lots of niggling symptoms that no-one added together until recently and last week was told he has an uncommon form of non hodgkins lymphoma which even when treated with chemo etc has a nasty habit of returning quickly and with greater aggressive resistence and severity. This means that he has effectively been given a time limit on his life and it is likely to be less than a couple of years, which as he is in his early 50's with 2 teenage children makes you think!


PLEASE SEE PREVIOUS POST IF YOU WOULD LIKE TO CHEER HIM ALONG.
My hubby has told all the departments that this very gentle man works with that I will make them a card for him, hubby thought it would be nicer to have several smaller cards than 1 large( so there will be more in the pipeline probably over the next few days) as they will brighten his hospital room which by all accounts he will be in a great deal of the time over the next 6 months. My dilema was and is what kind of card do you give to a man to cheer them up when they have this kind of prognosis, I could hardly put 'Get well soon' as this isn't going to happen so for all of them I have and will be using 'thinking of you' as I know his work colleagues and friends will be. 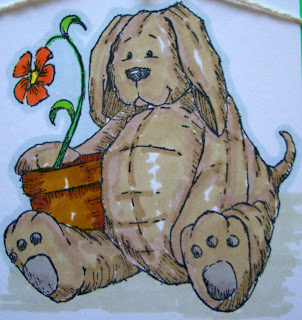 For the first card I have used this super cute dog called Macbeth from funky kits, although have to say I think if I gave him a pom-pom cotton wool tail he would make the cutest rabbit too. I think he looks so cute and caring giving his plant the tender loving protection of a hug as if he has grown something so beautiful from seed for the hazy days of summer.

I decided to go with a clean and simple style , lots of straight lines and sharpe angles and vivid colours for highlights. The image is coloured with promarkers and the plaid papers I printed from the boys to men cd from ooh lalal. The neon green paper is from my stash and the string is unravelled cotton garden twine which I thought appropriate.The sentiment is from a 'the darkroom' set and is stamped in bottle green dye ink and simply mounted on matt gold card. 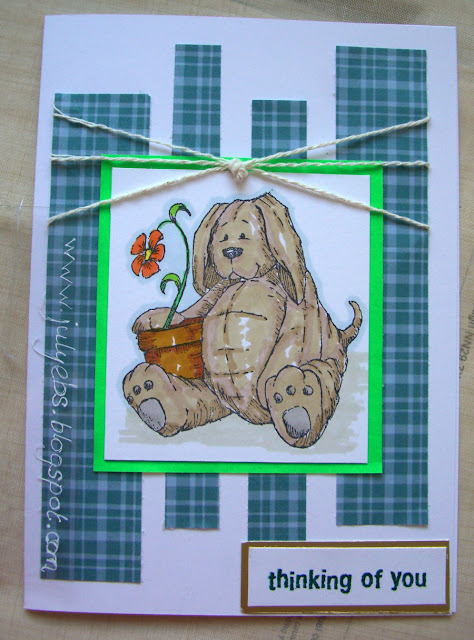 I would like to enter this card into the following challenges:-
For fun challenges-summer
addicted to stamps-summertime
ECP-colour challenge
Deconstucted sketch-layout
Shellys-boys/men
4 crafty chicks-get well(I know its not get wellas such but hope you understand given the circumstances that its for the same reason)
Allways something creative-early summer
Crazy 4 challenges-use string ,twine or floss
By the cute and girly-in the garden
Timbroscrapmania-in the garden
Posted by Julye at 3:26 pm

Thanks for joining us at ASC.
** Karla

Such a lovely image, now summer has come.
Thanks for joining us this week.

This is so sweet. Thanks for joining us at ATSC.

Cute card! Thanks for playing with us at 4 Crafty Chicks!

Your card is very pretty! Thanks for joining us at TSM Challenge! Lina

Your card is wonderful! Thank you so much for participating in this weeks Deconstructed Sketch!

Gorgeous card, thanks for sharing with us at ATSC
Teresa xx

My brother would just love how you colored this bunny. It reminds me of his stuffed bunny. It is a beautiful thinking of you card. Thanks so much for sharing it with us at 4 Crafty Chicks.

A Gorgeous card, what a cute image!
thanks for joining ATSC.
hugs, Marlies

Oh hun that's so sad :(
Your card is absolutely gorgeous Julye and so beautifully coloured.
Thanks for joining us at ATS
Hugs Mandy xx

Gorgeous card!
thanks for joining us at TSM challenge
Hugs
Nicoletta

This is really lovely. Thanks for joining us over at By the Cute and Girly this month and good luck. Hugs, Hanna