I was lucky enough to receieve this stamped image which I think is from sugar nellie in a swap, sadly the swap club is long defunked but I finally got around to colouring this cutie. I decided it would make a fab summer birthday card and as I was colouring it with promarkers and sakura gel pens which I used for the seaweed to add dimension and the shiny look of wet seaweed it made me drift back to my childhood. 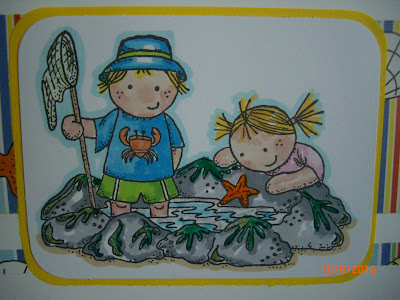 My birthday is in August and most of our summer holidays were taken around my birthday in Cornwall and Devon camping. Although I have memories of waking up on my airbed floating when the field we had our tent in had flooded and on my 12th birthday getting hit at the back of my knees with a land-rover that had no intention of not getting through the small roads of Mevagissy and mounted the pavement before swerving and tearing off up the road.
I also remember spending many happy hours rock pooling and I think my favourite place to do this was probably Marazion, there was even a rock pool that was so deep the two German shepherd dogs we had could and did swim in it. 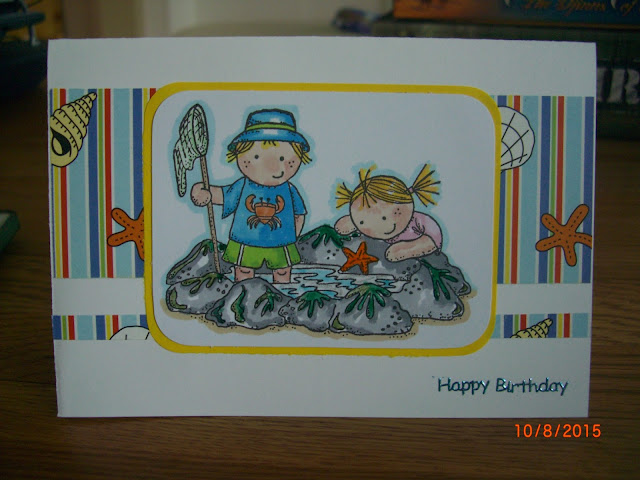 I decided to keep my card quite simple and used a layout from sketch saturday as my inspiration. I used some paper I had in my scraps folder that was originally a page from a craft magazine and simply cut it into pieces to resemble strips across the page. I kept to the bright and bold theme by matting my image on bright yellow copy paper after rounding the corners with a punch, as I repeated with the copy paper.

I finished the card by colouring a silver peel-off with a blue promarker and added to the card.

Gorgeous card, I love rock pools too! Thanks for playing along at Naughty or Nice Cahllenges, Jo x

Your card is so sweet! What a great way to enjoy summer. Thanks for joining us at Naughty or Nice Challenges!

Love the great colors you used and your coloring. Thanks for playing along at Sketch Saturday. Hope to see you again. xx Cathy SS DT

I love the image, your card was just perfect for my challenge at Quirky Crafts and although you didn't win this time we hope you will enter many more of our challenges.

Gorgeous card. Thanks for joining us at The Sugar Bowl.
Deborah A