Afternoon all ,well what was bright warm sunshine an hour ago has turned to dark skies and buckets of water falling from the heavens with occasional rumbles of thunder though no lightening yet, thank goodness we got back from our outing for lunch when we did.The one good thing is that this rain will hopefully stop it feeling so muggy.

I made this card earlier and now have chance to post it though hope by the time I get around to taking the pictures its a little bit brighter (if not and I end up posting tomorrow you'll know that the rain stuck around for longer than expected). Apologies also for the photo quality as hubby still hasn't got around to sorting out restoration of my windows profile with all my photo editing on so pics are simply uploaded and I am not the worlds greatest photographer. 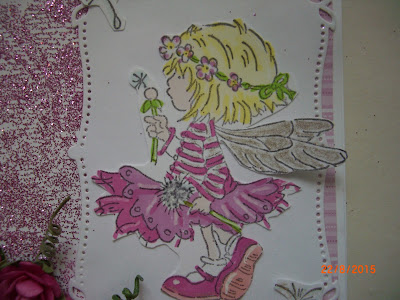 I made this card with one of my friends in mind her birthday isn't till September but as time just seems to disappear of late thought I better get prepared.

I wanted to push myself away from the clean and simple style I seem to be drawn to making of late so actually spent time working out how I could achieve that without getting into choosing what papers to use to match the image and all that.Many of you will know i'm not a pink girl so guess I really tried to stretch myself by using pink as my main colour must have really been having a brain storm or something like that.

I started with the Atlantic hearts layout which itself is fairly CAS and then decided I would use a lace stamp from the stampman to create the backing layer but to use a glue stamp pad and cover with glitter. I sprayed this with hairspray to try and stop the glitter getting brushed off too much. I used one of the deeper pink colours I used to colour the image to edge the card layer and then stuck it to the base card which I had already added a layer of stripped pink forever friends paper to. 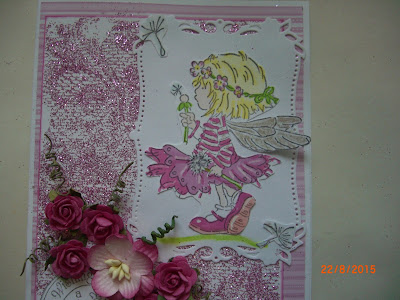 The image I chose is a lily of the valley fairy but after colouring with promarkers and adding sparkle to her wings with a sakura gel pen I fussy cut her as she was a little too big to fit onto the spellbinders die cut rectangle I had decided to use.I added a foam pad under her wings to give a 3 dimensional look. I actually think she looks better stuck to the die with the dandelion seeds spreading towards the edges of the diecut. 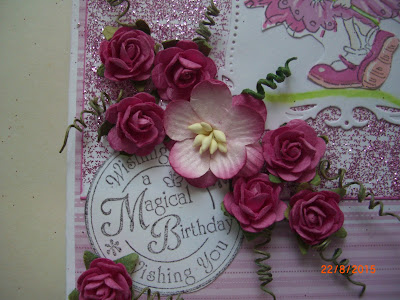 The sentiment is also lily of the valley which I stamped in memento ink and added some roses and a blossom style flower around to balance the card. 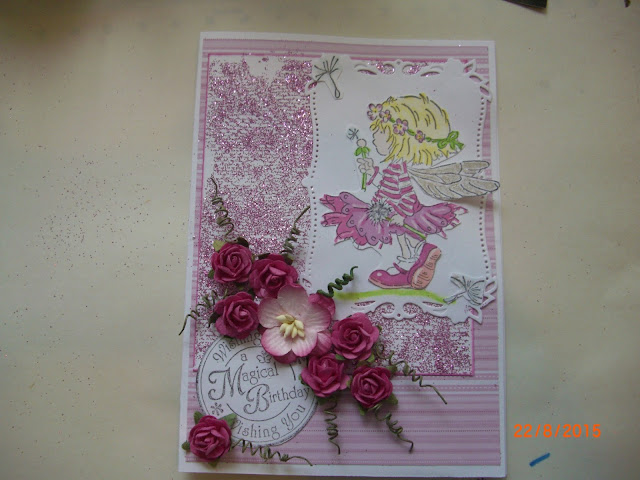 A gorgeous display of all things pink Julye and just perfect for our them at Allsorts this week, many thanks for sharing your lovely card with us.

So pretty.. I LOve your sparkle, embellishments and fussy cut wings and dandelion seeds. Thank you so much for joining us this week at QKR Stampede.
Chrissyxx

I love this image, have it myself! The entire card is so cute and well planned, but I love the popped out wings. I love cards that have wonderful texture like this! Thanks for joining us at CRAFT Challenge!

Such an adorable image and fabulous card design .Thank you for joining us at Aud Sentiments challenge good luck Ginny ♥

This is one of my favourite images - but I would never have thought of making the wings stand out like that - it's so effective!! I love your card design and the deep pink shades. Thank you for joining in our Things with Wings challenge at Fab'n Funky.
Alison x

Very pretty and feminine! The colours are amazing! Thanks for playing along with Atlantic Hearts Sketch Challenge (AHSC)!

Really love that sparkly background and that adorable image! So very glad you joined us at Seize the Birthday!

Oh, my, you stretched yourself beautifully! I love Lily of the Valley, and this fairy is so cute. Of course, she had to have sparkle, too! Utter sweetness! Thanks so much for sharing her in our QKR Stampede Use a Die Cut Challenge!

I really like that sweet little fairy. Thanks for joining us at Atlantic Hearts Sketch Challenge.

Cute! Love the whimsy feel and your fantasy take of the sketch! The glitter is a lovely touch!Thanks for playing along with Atlantic Hearts Sketch Challenge (AHSC)!

What a sweet card. Love your floral treatment! Thanks for playing along at AHSC!

Gorgeous - love all the glitter!

Thanks for joining us at the CRAFT Challenge.

Oh so pretty in pink! Love it! Thanks for joining us at Atlantic Hearts Sketch Challenge!

What a sweet image on your lovely card. Thanks so much for joining us at Seize the Birthday.

Great card, so fun. Thanks for joining us this week at QKR Stampede. Karal DT

Adorable image and card. Thank you for sharing with us at Ruby's Rainbow Challenge.

So sweet. Thank you so much for sharing with us at Ruby's Rainbow for our 'Dies or Punches' challenge.
Hugs Helen P x

Such a sweet card and I love the shade of pink you used. Thank you for joining in the In The Pink Challenge this time. Hope to see you again.

Hugs, Vannessa
In The Pink DT