Inspiration from a card on 'Outside the box'.
I used Moon-glow mica inks in different pink mixes( most have 2 tones so show other colours too when the light catches them ) and splodge painted a strip of white card. I added a trio of spiral paperclips to the wet surface and some rock salt and left to dry.
I removed the salt and paperclips and cut 2 strips with wavy sides before applying to a white base card. 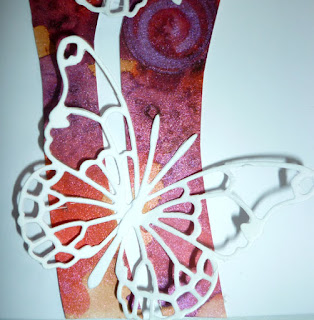 I used a memory Box die Vivienne butterfly and cut out 3 in white card which I stuck at angles to the gap I left between the wavy lines. 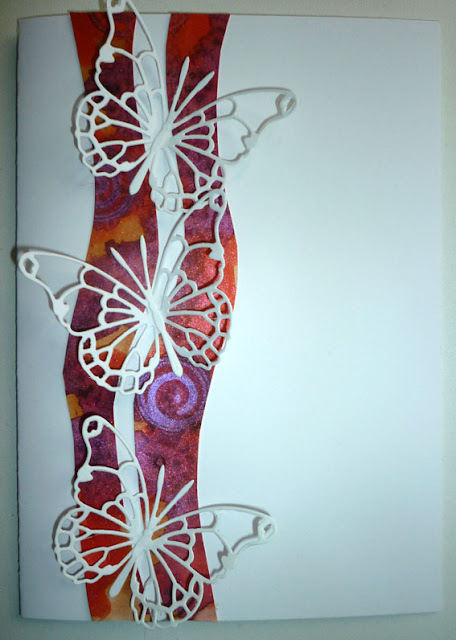 I don't normally do pink but in small amounts like this with the shine it has and sparkle from the pigments inks I can cope with pink and might do similar cards with different coloured inks.

It's hard to tell from the pictures but the butterflies are only attached by their bodies so the wings stand proud and floaty off the card.

Very pretty card, love the design you have created and its a lovely CAS card. Thank you for sharing with us in our challenge at Dream Valley and good luck in the draw. Jennifer DT member x

This is so lovely! the butterflies are stunning! Thank You for joining us at Crazy 4 Challenges. I hope you will visit us for our next challenge!

So pretty, your colorful strip with those gorgeous butterflies!

Love this CAS card. Great job with the inks and gorgeous die cut butterfly. Thanks for joining us at CCT this week :)

Fabulous depth to your backrgound wave. strp The colors are so rich. The simple butterflies are the perfect finishing touch. Thanks for sharing.

Such a delightfully pretty card! Thank you for joining us over on the HIMCR blog.

Fantastic CAS style card love the swirl of colour up the middle and the butterfly dies. Thanks for joining us over at Star Stampz, good luck and hope to see you again.
~ Denise DT ~﻿

This is so pretty and unique. Thanks for joining our monochromatic challenge at Star Stampz challenge blog. Julie, DT member

Love your creative placement of these butterflies. Thanks for joining the Simply Create Too challenge this month.