Pick and mix set yourself challenge

Told you I'd be back, card in the post with an explanation so my little sis doesn't try and get me put away. This one is for hubby's sister, just one more to do though I'm not going to get that in the post and there for monday for his other sister never mind it can arrive late , it's the thought that counts and he will see this sister tomorrow as she and her hubby are coming for lunch as it's her birthday, so he can give her her card. If I make a flatish card for his other sister it might get in the post will have to see how time goes.


Well for those who pop into my wierd gabbling s regularly, you will know the other day I had a whim to bake , which I did and then ended up feeding half to the birds as I threw them on the floor. The others I decorated in pinks and gave to my neighbours daughter as it was her birthday, I did give her a card and gift too.She informed me about an hour later about 9:30 that they were lovely so I guess they quickly followed breakfast. Sad to say I forgot to take a piccy, I will try and take a piccy of the cake I've made for Kelly hubby's sis, nothing spectacular just a lemon drizzle cake but I've added some pink and lemon edible glitter and I do think it adds a little something. 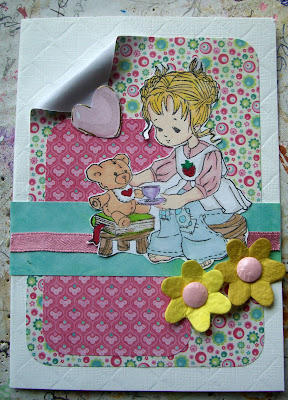 Oops, gabbling on again ,my card. This is for the latest challenge over at the sugar bowl where you get to do it yourself, in the choosing of which past sketch to use and what theme and of course making your project. There is even a do it yourself element to thefab prize too you get to pick which 6 stamps you want and choose from 2 letraset pen sets, promarkers or the new aquamarkers.
My card is based on sketch 18 and I used this fab cute teddy teaparty stamp not sure of its proper name but I do think it's just so cute. The papers are freebies and the flowers I think were from some scrapbooking kit from way back not sure of the make sorry.
Posted by Julye at 3:50 pm

Very cute - I like the colors and the corner folded down.

Your card is just adorable! She'll love it! Very sweet image and lovely colors. Thanks for joining the Sugar Bowl challenge!