Asian challenges for the new year 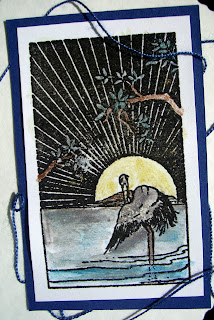 I must have been in tune with someone over the weekend, as after trying to reorganise my craft room I found these stamps I'd not used in a while and decided to play a little, only to find that the corrosive challenge has an asian theme and that just happened to be the catergory my stamp falls into. The image is of a heron which apparently is a symbol of longevity so I was told by a person of oriental descent. The reason is they mate for life so whether its longevity of a partnership or life I'm not sure but it sounds a nice sentiment whichever, well I think so. I made 2 different cards using the same image so I guess you get 2 for the price of one, both images are powder embossed  the first in black and then painted with moonglow powders, simply mounted and I added a tassel I made a while ago when I was experimenting. I think the tassel is just the finishing tough and it would make a fab card for a man. 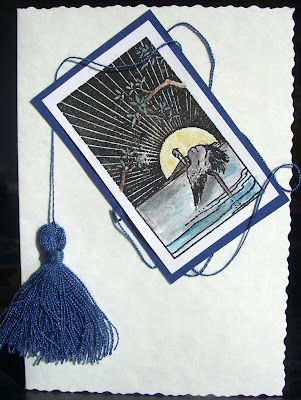 The second card I made I used moonglow embossing powder madonna blue/gold, although it does look more silver, and I love the effect. I stamped onto vellum which I am always a little wary of doing for some reason. 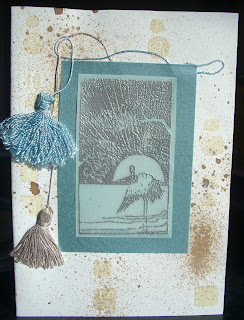 The base card is spritzed with moonglow mist and then I used pearl blue embossing powder on the little text symbols which I dotted around the background and then repeated inside the card. The whole thing is again finished with homemade tassels in complementing colours. This I think could double as a mans card or an anniversary card, see what you think.

I must have known there would be more than one asian theme as Sophisticats also has an oriental themed challenge this time, hope they don't mind sharing the same post.
Posted by Julye at 5:09 pm

Gorgeous card, the image is lovely.
Thanks for joining us at Sophisti-Cats this week and we hope you'll be back next week
Tasha
xxxxx

Wow, you've been busy. I struggled with one. Thanks for joining us at Sophisitcats this week. Hope to see you next week. Hugs Tracy x

Wow! Very pretty card!!! Thanks for joining us at Sophisti-Cat this week!
Hugs,
Diana

Fab cards love the image. Thanks for joining the Sophisti-cats challenge this week. luv gina xx