Living up to Squirrel standards 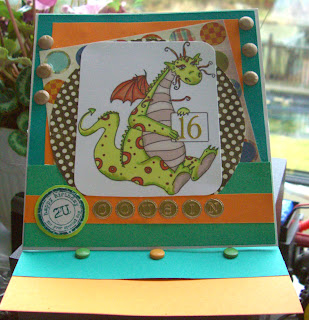 My nephew has a birthday coming up and my son wanted a card for his older cousin, well he is 6 weeks older and for Andrew, Ben's birthday marks the countdown to his own birthday. Little did I know when I went to see |Ben in hospital when he was but hours old that Andrew would arrive so soon after, as he was meant to arrive in July not April!

Anyway, boys card I find hard, so as Andrew wanted the card, I thought get some insight while you can and pick his brains. What kinda thing do you want on Ben's card I asked. I have in the past done the things he's intrested in, skiing, fishing, computers, DS. I waited with baited breath ... have you got a dragon like on the cards I got from those craft blogger friends that I was sent. Totally not what I was expecting. Do you really think Ben will like that, well I do, was the reply. I don't have any dragon stamps but found a digi ( I think it's a pollycraft but am not sure but will edit when I find out), which got approval. 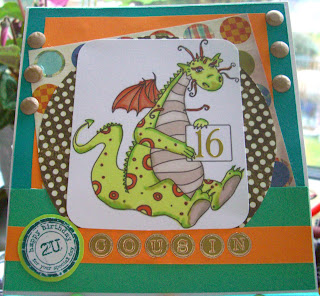 Right what colours I asked? Like Squirrels of course, do you think you can do it as good as Squirrels? I said I would try and begrudingly it was approved.

Andrew hasn't yet seen the finished card as it was suppose to be made to be as good as Squirrels and to tell the truth I think thats alot to live up to, and am a little scared that I'll just get an 'It's ok.' So Squirrel what do you think, can I tell Andrew I have your approval or will it say on my report card, must try harder? I actually wish I'd not asked, and they say women are the ones that are hard to please, I definitely think sons' and men in general are worse. Not really sure why I'm worrying as I know Ben will just look to see if there's any money in it and not really bother with the card.

I have decided I will enter this card into some challenges, so here goes.
The first is Lili of the Valley who want an easel card this time.
Cupcake craft challenge want lots of circles and I have lots of those.
Creative card crew have a celebrations theme so I can enter that.
The layout is Incy Wincy but rotated hope you can tell.
Finally Allsorts have a just for men challenge, and I know technically 16 isn't a man but I'm sure Ben will think so so I will enter their challenge too.

Thanks for popping by.
Posted by Julye at 8:05 am

An OK? Hun, it's FANTASTIC! Love the dragon image you have used, the colours are superb and I adore how you've made him into an easel card. Stop worrying hun, it's absolutely BRILLIANT (and don't let that son of yours tell you otherwise!). Hugs, Squirrel xxxxx

What a wonderful card! Love the image. I'm so glad you joined the Allsorts challenge this week and good luck.

Great card love the easel not tried one yet! Thanks for joining incy wincy

Gorgeous card.
Thanks for joining us at Incy Wincy Designs.
Tami

This is a gorgeous Easel card lovely image too, thank you for joining us at LOTV this time, hugs pops x x x