Why did I start?

I suppopse I should explain. Well my craft room was, is not sure now well it was the box room bedroom and I just use to put anything else in there that I wasn't sure where to put. It got very cosy to say the least but I could sit in my chair and with an outstretched arm get virtually anything I wanted.

A couple of weeks ago I was complaining yet again about all the board games hubby buys and the remote control cars he and my son have and things generally getting dumped and just generally having a big winge. For some reason my son suggested we could swap my craft room to the big bedroom that is the board game etc room and dvd storage with my craft room , I could then have my computer and craft all in one room and it wouldn't look such a mess if all the other stuff was in a different room. What he really meant was I wouldn't see it as often and complain as much, but I did like the idea of a bigger craft room, more room for stash.
I ran it by hubby saying we could get some shelves and he'd beable to find games etc easier , he just said whatever. Well today don't know why maybe its cos all the frogs are descending on the pond to spawn and it means spring is here but I decided to make a start. What a mistake it feels like. I am so glad that my son is still having to sleep downstairs post surgery as it means I can use his room as a weigh station. My sister in law has moved into her mums house as they have bought it as her parents have moved to tenerife and she has some book cases and units she said I could have , but am waiting on them arriving as they are too big for my car, and now I could really do with them but I so don't want to hassle her as I'm sure she has enough on swapping houses and getting hers ready to sell, but I so don't know where to put things and consequently I'm not sure when I'll be able to craft.

Good job it was mothers day yesturday and I managed a couple of projects. Here is the first. I printed this fab fun image a while ago it was a bugaboo freebie and I think it makes such a fun get well card especially for a man.Catch the bug have a fab sketch this week and so I thought I'd have a go at entering their challenge. I must admit they have some real fun images but I'm not really a digi girl even though I can see all the positive virtues of digi's, so once in a while I try to make the effort and use a digi. 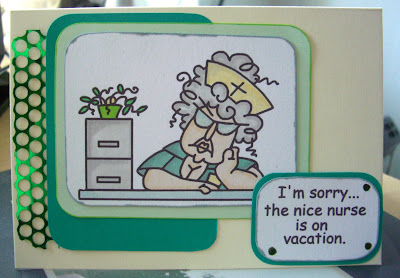 There are alot of green challenges around this week on account of St.Patricks day, and as I don't know of anyone who really celebrates for the right reason and not just the excuse of a booze up I thought I would just use green on my card with a touch of cream to satisfy some of the challenges too.

The challenges I will enter this card for under the green theme are:-
Incy wincy-green
stamp something-green and cream
fussy and fancy-green
cupcake craft challenge-going green

I am also entering into the crazy for challenges who have a theme of for a male. I think this would make a fab man get well card , hope they agree.
Posted by Julye at 4:32 pm

Good luck with the new craft room!...I am sooooo jealous!

I would love an actual room and not just my cupboard under the stairs!...it's all starting to spill out into the living room!lol

A great funny card!
Thank you for joining us at Stamp Something this week!

What a GREAT card!!! That image and sentiment are hilarious!!!! Good luck with the room swap..it WILL be worth it in the end, I promise! I did the same thing!!!! THANKS for joining us at Incy Wincy Designs!
Chris

Thank you for joining in at Incy Wincy Designs this week :)

That shade of green definitely makes me think of hospitals. . .;) Thanks so much for participating in Bugaboo Stamp's sketch challenge at Catch the Bug!!!

Fantastic card and such a brilliantly matched sentiment...thanks for joining in the fun at Cupcake this week :) Donna x

Fantastic card, love how you used the color green. Thanks for joining us at Bugaboo's sketch challenge.

Also for playing along with us at Fussy & Fancy

Very creative, love it!
Thanks for joining the Bugaboo challenge

Fantastic,love this image and a fabulous take on the sketch!!! Thanks for joining us at Bugaboo!!
xx

Hi Julye, what a fun card. Love the cute image and hilarious sentiment. Great layout and colour scheme. Thanks for joining us at cupcake craft challenge this week. Hugs, Denise x

I do hope you get yoru craft room sorted soon!!

Thanks for joining us on Stamp Something this week :)

Love this image--and love your card. Thanks for playing in the Bugaboo challenge.

Great Card. Thanks for playing with Catch the Bug!

Great card! Fabu colors for this week too! Thanks for joining us at Catch the Bug Challenges!

That sentiment just cracks me up! Great card :)

Fun image and sentiment! Thank you for joining us at Fussy and Fancy Friday!
Hugs,
April

Wow sounds like you have a big project going on. Your card made me laugh. Thank you for joining us at Fussy and Fancy Friday!
Hugs,
Jennifer