This is the first bottle collar I have ever made, it was a toss up between dressing the bottle in a coat or making a big tag so as ISB have a challenge to make a bottle collar the decision was made for me.

They have a recipe also to use buttons, ribbon and a tag. The buttons are the pearl snowflakes on my flowers shanks removed of course, the ribbon is on the card and also attatched to the tag which you can see poking out of the panel with Tilda on. It quite simply says merry christmas on it , who its to and from.

I don't have many magnolia stamps so I had to use one of the 2 I recently required so decided to see if I could combine this challenge with another magnolia challenge and Just Magnolia have a sketch. I am getting more use to following sketches and am often pleased with the reults so thiught I would give it a go.
I must admit that as this collar is for a bottle of wine for my father in law I didn't want it too flowery so that did cause me some problems deciding how to interpret the sketch and not make it girly especially using Tilda. It's not quite my choice but I took it into the kitchen and put it around a bottle neck and my hubby sort of laughed and said very good and then asked if there was only the wine for his dad still to get so I presume that means its ok,well I hope so anyway.

Magnolia down under have a challenge to use a stamp for an occassion other than its original design use so as I have now found out this magnolia was originally for valentines day and as I'm using it for christmas it will count for that challenge.

Playdate cafe have a colour theme of blue, cream and gold and as these are the colours I've used plus a little white and pink white pearls and pink hearts I think I can enter that too. Creatalicious wanted something old- the cream pearl paper is from an old envelope I was sent a card in, something new, well the stamp I aquirred about 6 weeks ago so its fairly new, something torn, I tore the pearl paper and something blue , I have a blue base colour and tilda along with blue glitter on Tilda's boots and skeleton leaves, which I cut and punched to make the pointsettia and smaller flowers. 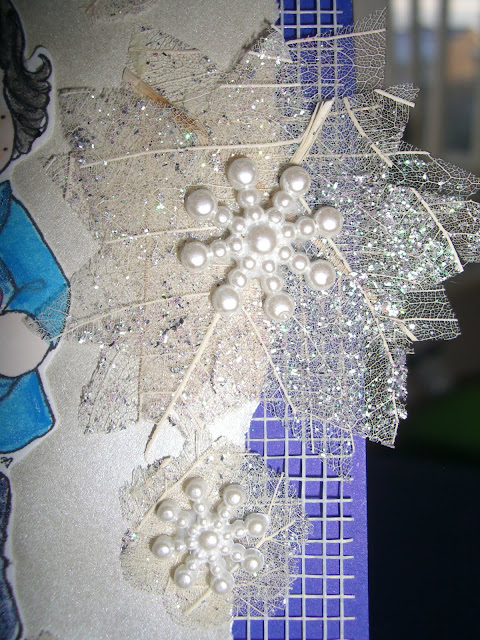 One stop craft challenge have a theme of recycled and I will enter that challenge as my cream pearl paper is from a recycled envelope.

What a great way to give a bottle of wine and your Tilda image showing all her love is ideal for this Christmas gift. Very creative. Thanks for joining the fun at MDUC this week. Hope to see you back again next challenge.

Wonderful xmas card using a Valentine stamp. Wonderful idea. Love the image and the colours you have used. Beautiful card. Thanks for joining us at MDUC.
mwah
Trace

Wow I'd love to dress up a bottle like yours! Great job with our challenge...hope to see you at the next one!

Wow, what a beautiful idea. I think it's brilliant how you have used the stamp in that different way.

I wish you a Merry Christmas and a Happy New Year.

Oh now that is the way to present a bottle, lovely, thanks for joining us at the Play Date Cafe. Sandi

You've made a fantastic bottle-hanger and picked gorgeous colors. Thanks for playing with us at ISBC.

your tag looks fantastic. The snowflakes are just fabulous. Like it very much.

Thanks for joining our ISB Challenge.

Wish you a merry christmas and a happy new year.

What a super cute and fun idea.. :) I love the snowflake too :) Thanks for playing with us at the cafe.. HUGS

~Check out the new free digital stamps on my blog..

Wonderful creation! Thanks for joining us at MDUC!

Fab project, great gift idea too! Thanks for playing along at Just Magnolia. Have a Happy New Year! :)

Just beautiful,love your snowflakes and what a lovely gift idea!!! Thanks for joining us at Creatalicious!!
xx

Thanks for joing in with our OSCC.
Hugs Shelley xx

Oh my goodness! Ehat a wonderful poinsettia flower made from those leaves! I love it. Your card is fantastic. Thank you so much for joining the One Stop Craft Challenge.
Sharon xx

So sorry on the delay.. Wow this is so pretty. thanks for joining us at..BBCC

Fabullous Idea. thanks so much for joining Magnolia Down Under challenges.
Kristy x

It´s look´s fantastic. The snowflakes are wonderful.
Thanks for join the ISB-Challenge,