Something a little different

Thought I'd show you something I did a little while age and have been meaning to post since, and as Quixotic challenges have a theme of 'flutter by' I thought it would be good to enter that as I've not had a lot of time to do any crafting and seem to be squeezing in the odd 5 minutes here and there. I keep having to try and take bits downstairs so I am in the same room as Andrew as he keeps saying he wants me around not usual so it must be that he is feeling vulnerable being stuck in one place all the time, but we now have an appiontment to have his stitches out  the 2nd week of february so he has something to look forward to.

My flutter by entry isn't a card and my pictures only show bits of it, have I got you intrigued yet. It was a total experiment but I was so pleased it worked as there won't be another like it. 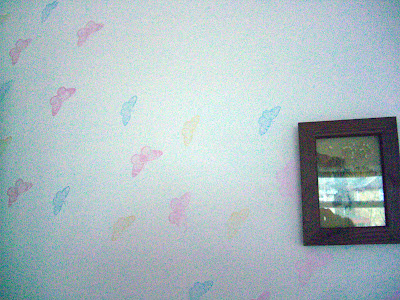 I repainted my bedroom in a white with a hint of pink, its called blossom but you wouldn't have known it was pink. It sees to change shade depending on wheter I put pink bedding on or pale blue, the pink being more predominent when the pink bedding is on. My bedding has butterflies on and I realised I had a very similar stamp to the butterflies on my bedding. I got my pink brilliance ink and decided to see if it would stamp on the wall. It did and that was the start. I stamped butterflies all around my room in pink, blue and gold brilliance inks as though a flight of butterflies had flown in through mt window at one side , around the room and out the window at the other. I am lucky I have such a tolerable huisband as he never said a word, apart from oh you redecorated. The piccies don't show it very well but hope it inspires you to experiment too. 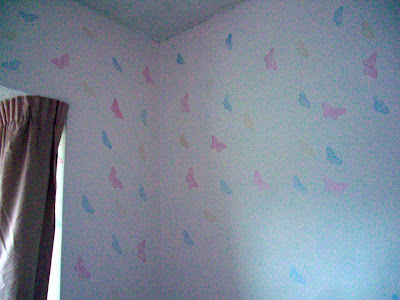 Creative inspirations #45 have a feminine theme this week so I thought I might enter my bedroom wall for that too.

On a different note for those who have been following my sons progress, he has so loved recieving the cards you special crafters have sent, there are some really special caring people in craft blog land. He is still getting a bit of pain but managing to do some school work and staying positive but your cards have really helped so hugs and thankyous to you select few.Here he is chillin out!

For those who haven't got a clue what I'm waffling about read this post here.
Posted by Julye at 11:00 am

Wow Julye fab idea hunny these look gorgeous, so pretty and feminine, poor hubby lol.
Say hi to Andrew for me he must be getting so fed up, glad he has a date for his stitches to be removed.
Have a good weekend
hugs Mandy xx

Wow! That is beautiful! Looks very time consuming! You did an amazing job!
Hope your son has a speedy recovery!
Thanks for visiting my blog on the Sweet Pea Stamps blog hop!

WOW! I love it! What a fabulous idea, so beautifully done. Thanks for joining us at Quixotic Paperie Challenge this week. Kim