A Valentine ... they aren't just for your true love.

Each year I have been sending a non gushing valentine to my son, un signed and to this day he hasn't worked out who its from. One year he did ask if I had sent it and truethfully I said yes. He didn't believe me as he said I wouldn't waste my money on a shop bought card which I have to confess on these occassions I do just to throw him off the scent, but I thought I would be more confusing this year and tell him I'm sending him a card and so this is the purpose of this creation, along with entering some challenges of course. I just hope he doesn't look at my blog and catch me out.

Here is my creation, last year he sent simple cards to a couple of friends, the girls next door, they are both a little younger than him and the older one had had a terriffic injury to her face when at a new years eve party of a family friend was attacked by their rottweiler dog and left with a huge scar where her face was torn apart. my son just wanted her to fel special as she was going through a bad patch and you can't send one sister a card without the other, and it made him feel good too.So tell your friends and others close to you how much you care , not those you admire from a distance. 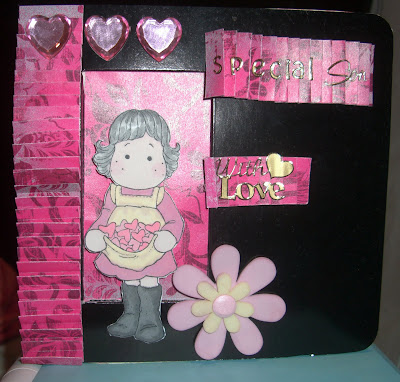 My card layout is from the challenge at sketch and stash #26 assuming I've not been too slow and missed any of the challenges I've used deadlines, things have been slipping having my son off school for health and safety reasons, its apparently too dangerous for him to push himself and his TA's to help push him around school in this weather , its something to do with there being no wheelchair access indoors around school. Still its stopping him catch cold before his surgery next week, but if they say he can go back now its so close I just know he's not going to want to. 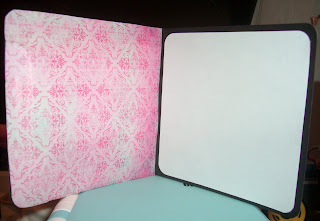 The Valentine challenge is over at Lili-boo too and the colour scheme which lends itself so well is from the challenge at Kl stampin and scrappin challenge.

Both magnolicious and Just magnolia have technique challenges. Just magnolia has paper pleating which is quite theraputic and I dare say addictive. Magnolicious have a challenge to make a frame card . Both have fab tutorials and I experimented with my frame so it wasn't the full card, suprisingly easy and both techniquies very effective, why not try yourself.
Posted by Julye at 12:11 pm

A great card for a great son
Lisa ;)

This is just gorgeous and I love your paper pleating.
What a lovely, thoughtful son you have, lucky you!
Thanks so much for joining in with Sketch & Stash.

What a gorgeous card. I love your image and your colour choice is lovely. Great pleating - so glad you could join us on JM this week!
-x-

Great card for such a sweet son. Love the pleating too. :) Thanks for joining us at KL Stampin N Scrappin! Hugs, Kelly :)

Gorgeous card I love the paper pleating and the colours are fabulous! What a kind and caring son you have
Thanks so much for joining us at LBT this month
Juliexx

Very cute card Julye! Your image is very pretty and your detailing is fabulous! Thank you for participating with the KLSNS Challenge!
hugs
Risa:)

pleats are great such pretty colours too, thanks joining us @ LB2's

Very sweet, great colors & beautiful paper pleating with Tilda! Thanks for joining in on the challenge with us!